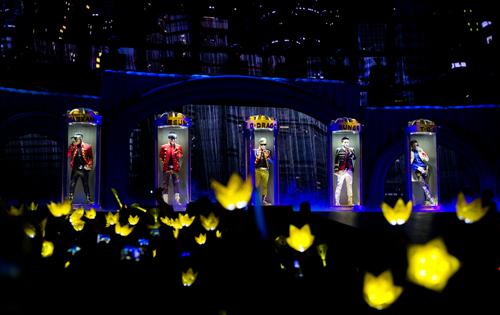 "Big Bang’s world tour “Alive Galaxy Tour 2012” has been successfully performed in Thailand," announced Big Bang’s management company YG Entertainment on October 7. According to YG, Big Bang has drew a total 20,000 fans to their two-day gala show on October 5–6 at Impact-arena in Bangkok. Big Bang performed exclusively in Thailand for the first time in four years since their show in 2008.

Big Bang opened their gala show with “Still Alive” and performed 24 songs, including hits such as “Geojitmal (lie),” “Haruharu (day by day),” “Cheonguk (heaven),” and “Fantastic Baby”, as well as solo songs by band members.

“When Big Bang members arrived at Thailand, their fans crowded Suvarnabhumi Airport, welcoming them with eagerness and passion. And when the band were returning to Korea after finishing their gala show on October 6, their fans also filled up the airport to see them off. Their performances were so popular that they were a hot topic day after day in Bankok and even expensive scalpers' tickets appeared during the events,” commented a staff of YG Entertainment who accompanied the tour.
Following the gala performances in Thailand, Big Bang plans to continue their world tour until the end of this year in such Asian countries as Indonesia, Taiwan, Philippines and Malaysia this month, and in Los Angeles and New Jersey in the U.S., and Peru in South America next month, and Hong Kong and Japan in December. [Yonhap]