Lee Siyoung to give her father massage [Golden Cross] 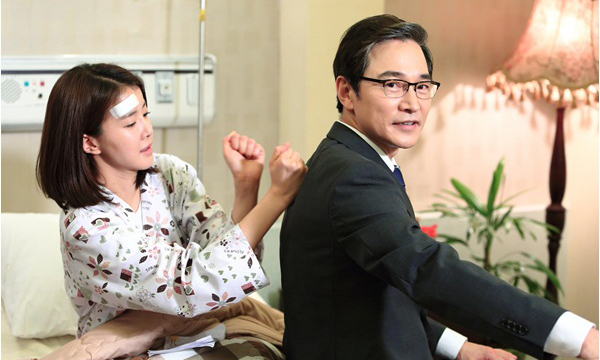 KBS Wed/Thurs drama “Golden Cross” team released a photo of Lee Siyoung giving Jung Bosuk massage when they are taking a rest. Although their relationship is at risk in drama, they still look lovely when the camera is off.

The steel cut was photographed when they were filming the scene which Seo Dongha tried to murder Kang Doyun who is in hospital and Seo Ire, who noticed his attempt, cleared her throat on purpose to stop his father.
However, in behind the scene cuts, they look totally different. Siyoung is giving him a tapotement. Bosuk seems to be enjoying himself smiling at her.
Meanwhile, Ire met Seo Dongha to persuade him to turn himself in. Seo Dongha realized that he couldn’t stop his daughter and Kang Doyun and reached out for Kim Jaegab, the head of Golden Cross. Doyun, Im Gyeongjae, and Gal Sangjun are getting ready to expose the secrets behind selling Hanmin Bank and Kang Juwan’s death.
[Golden Cross]
Showtime: Wed-Thurs 09:50pm | Thurs-Fri 04:10am | Fri 02:00pm (Seoul, UTC+9).