MONSTA X will continue their world tour 'BEAUTIFUL' in Europe. 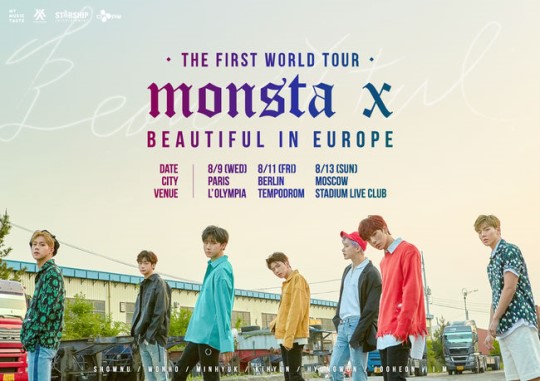 On August 9, MONSTA X will meet their local fans in Paris in 'MONSTA X, THE FIRST WORLD TOUR 'BEAUTIFUL IN PARIS.' Then they will be in Berlin and Moscow on 11th and 13th, respectively.

The agency stated, "The members are very excited since this is their first Europe tour. They will put on their best performance."

Previously, MONSTA X has captivated their fans in Seoul, Hong Kong, United States and Thailand. Now it's time for the fans in Europe!

MONSTA X released their summer song 'NEWTON' on July 27. Their first repackage album 'Shine Forever' ranked no. 1 in many Korean music charts, and it ranked no.1 in 'Worldwide iTunes Chart’ Kpop chart in 19 countries world-wide. They have also been invited to the main stage of the Summer Sonic taking place in Osaka and Tokyo on August 19-20.