I love watching KBS dramas! From their unique storyline, original sound tracks, and their talented actors, what else can I ask for? But asides from these reasons, I also watch dramas so I can learn Korean. It's one of the ways I study while having fun! So, here are the 10 phrases I learned from watching KBS World’s latest drama, School 2017! 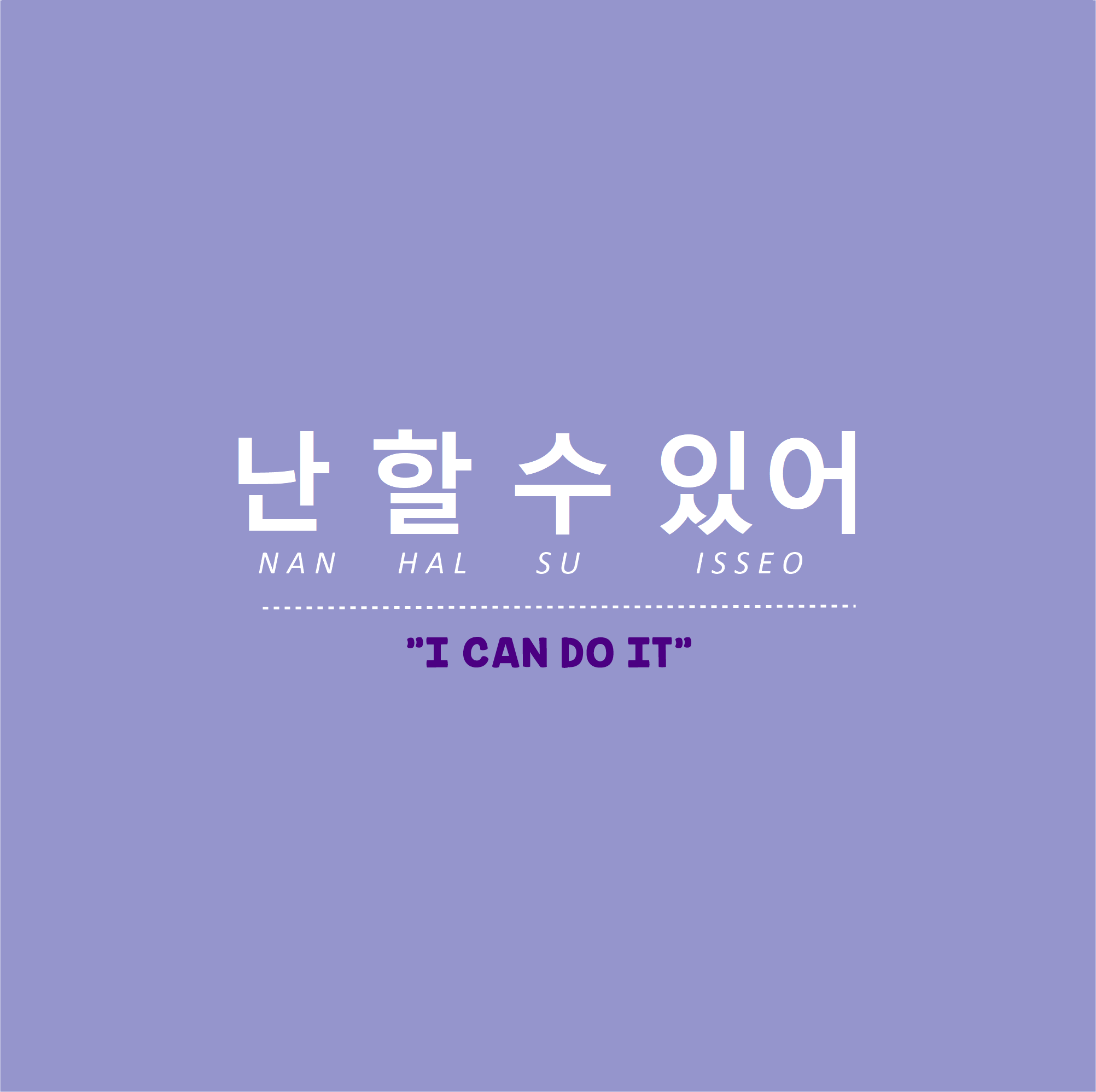 Just like our Heroine, Ra Eunho, we too encounter challenges on the road to our dreams. Eunho desperately wants to enter Hanguk University and despite her peers doubting her ability and the false accusations thrown at her, she still managed to stay strong. Why is that? It's because she believed in herself, "난 할 수 있어" as she would always say. If you're having a tough time right now, with school, work or any other, say it too "난 할 수 있어", and remember you'll get through it stronger! 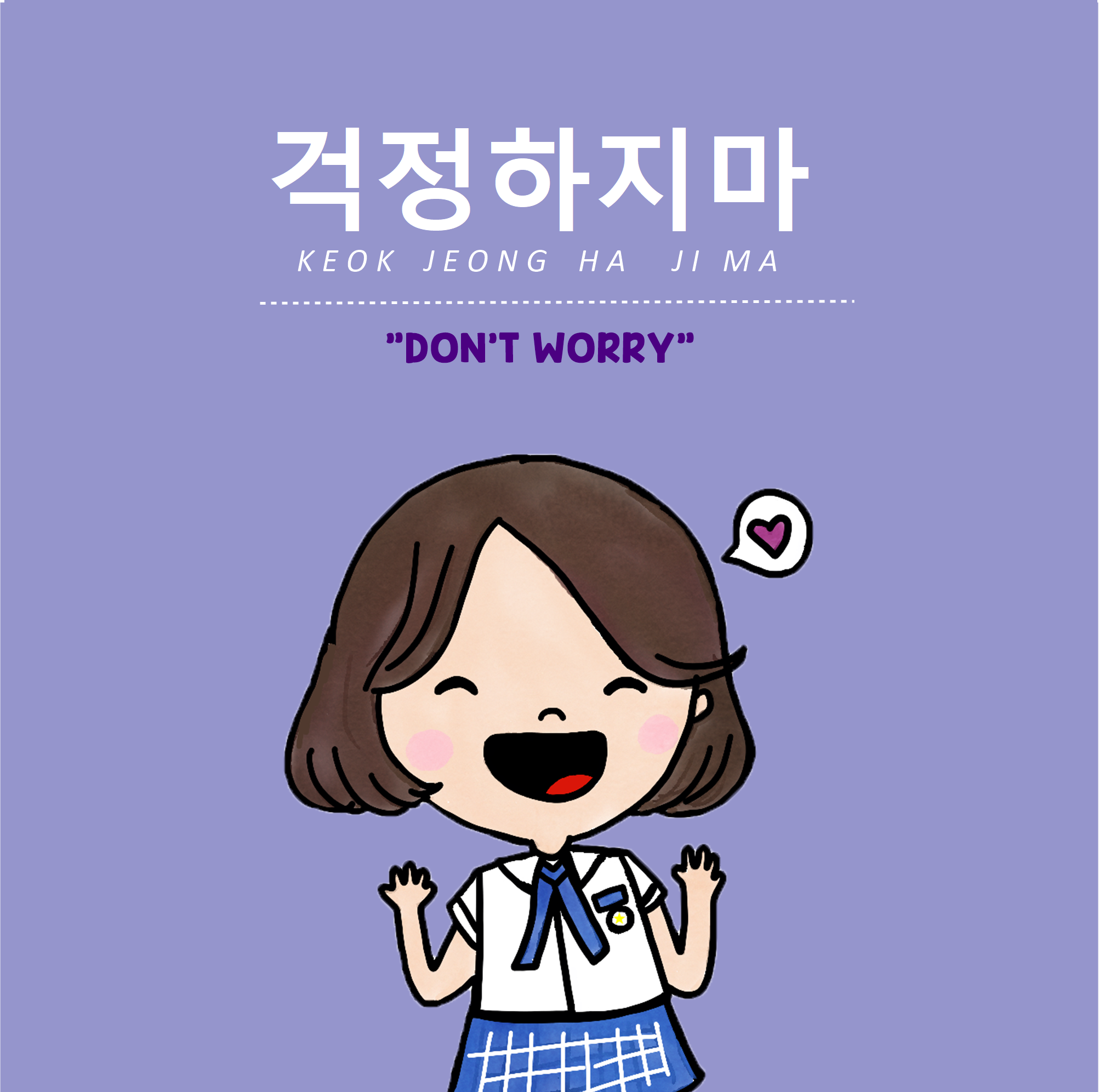 This phrase is not in its formal form so you can only say it, probably hear it too, from your close friends. That's probably why we often hear it from Oh Sarang, Ra Eunho's best friend, or I should say "sidekick". So if you have a friend who seems a little anxious, just say "걱정하지마", it might just be the word your friend needs to hear. 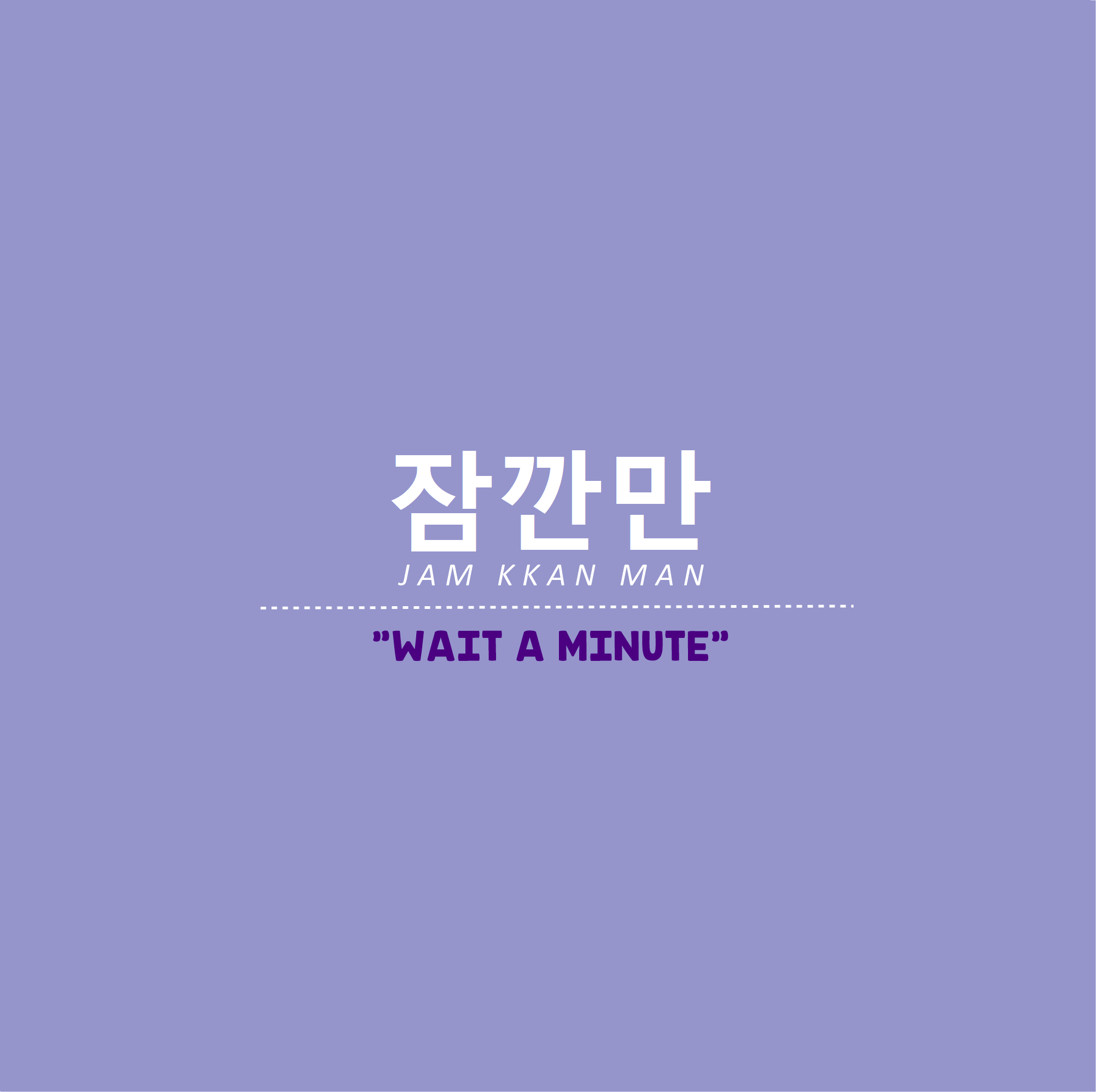 If you've watched the first episodes of School 2017, you'll probably remember this "dugun-dugun" moment when Ra Eun was trying to compare Tae Woon's lips with that of the culprit's she drew. As she was slowly asking him to "잠깐만", he leans forward as if he was about to kiss her. Whoops, I hope this is not considered as a spoiler! 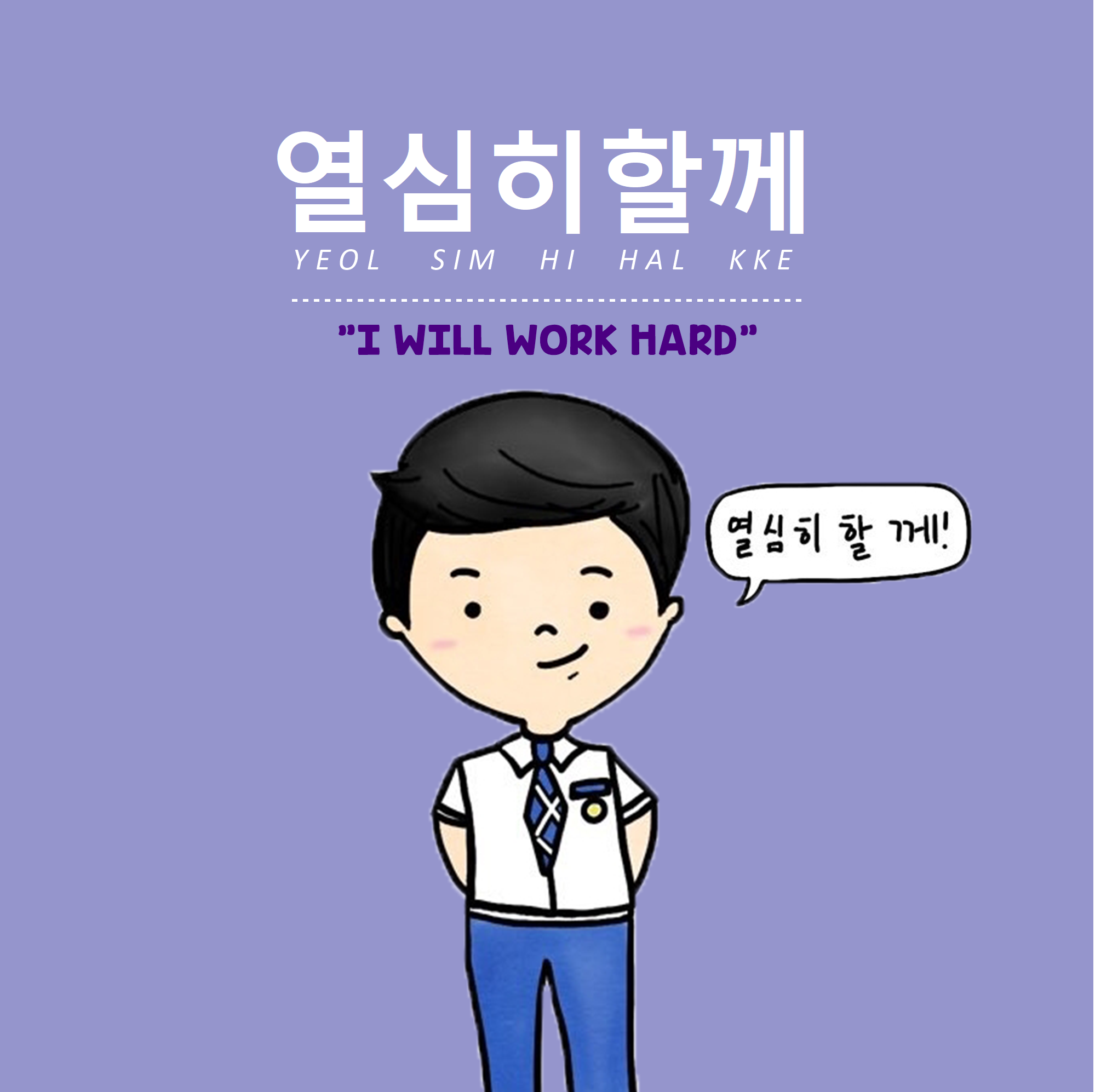 Song Daehwi, the class president with "secrets", yes, "no-spoilers-welcomed-here". In one of the episodes, we find Daehwi struggling financially at the same time emotionally with the injustice he experienced from people with power and money. "열심히할께" he says, explaining that in order to gain the respect he has to work harder. Also, you might have already heard this from K-Pop artists when they promote their new album, “열심히 하겠습니다” (yeol sim hi ha gesseum ni da) (formal). 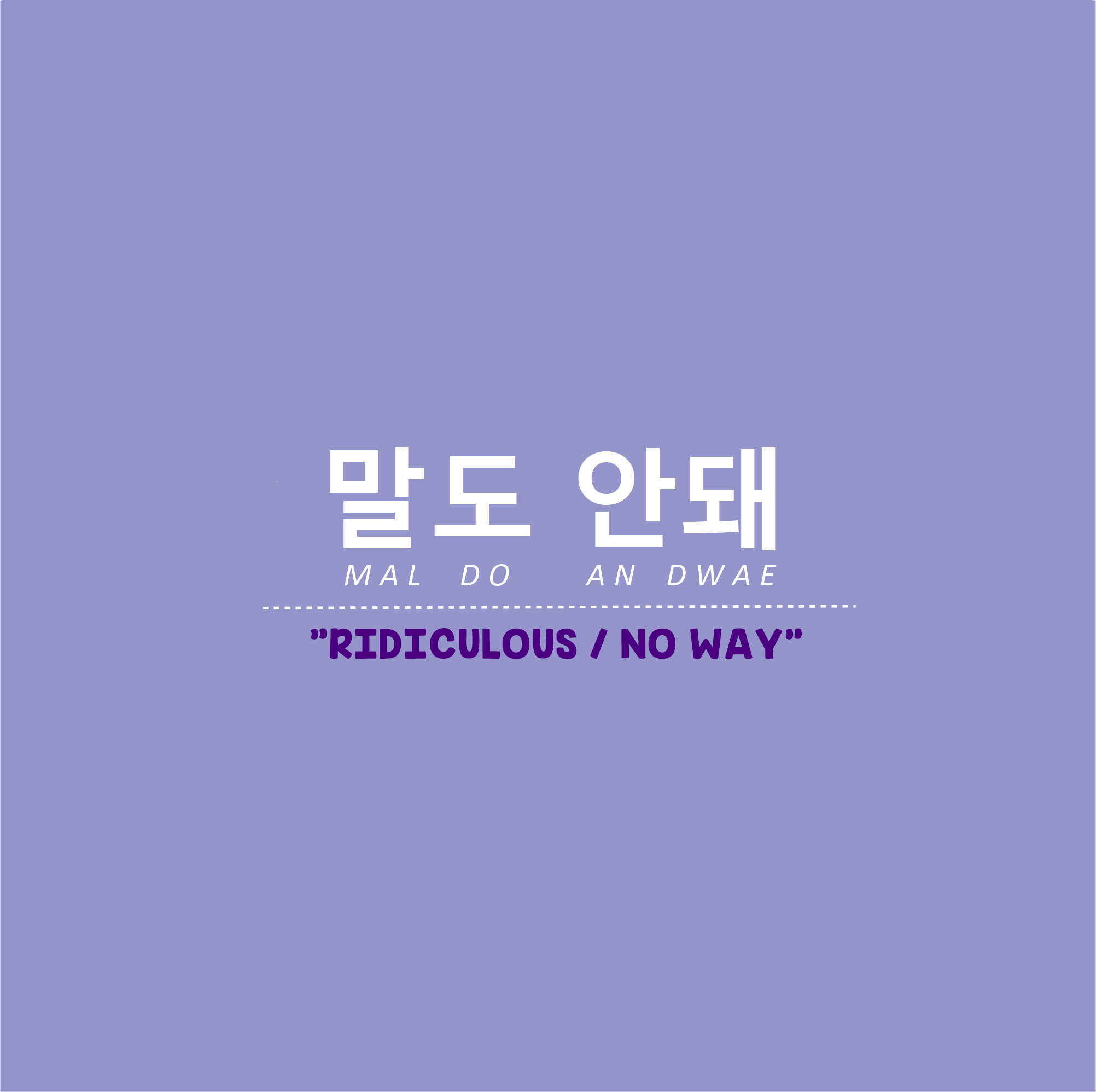 From complaining about your demerits or receiving a good grade unexpectedly, "말도 안돼" can either be a phrase used positively or negatively. I hope when you read the title of this article you said "말도 안돼" in a “positive way”. Yes, you can indeed learn Korean while watching your favorite drama! 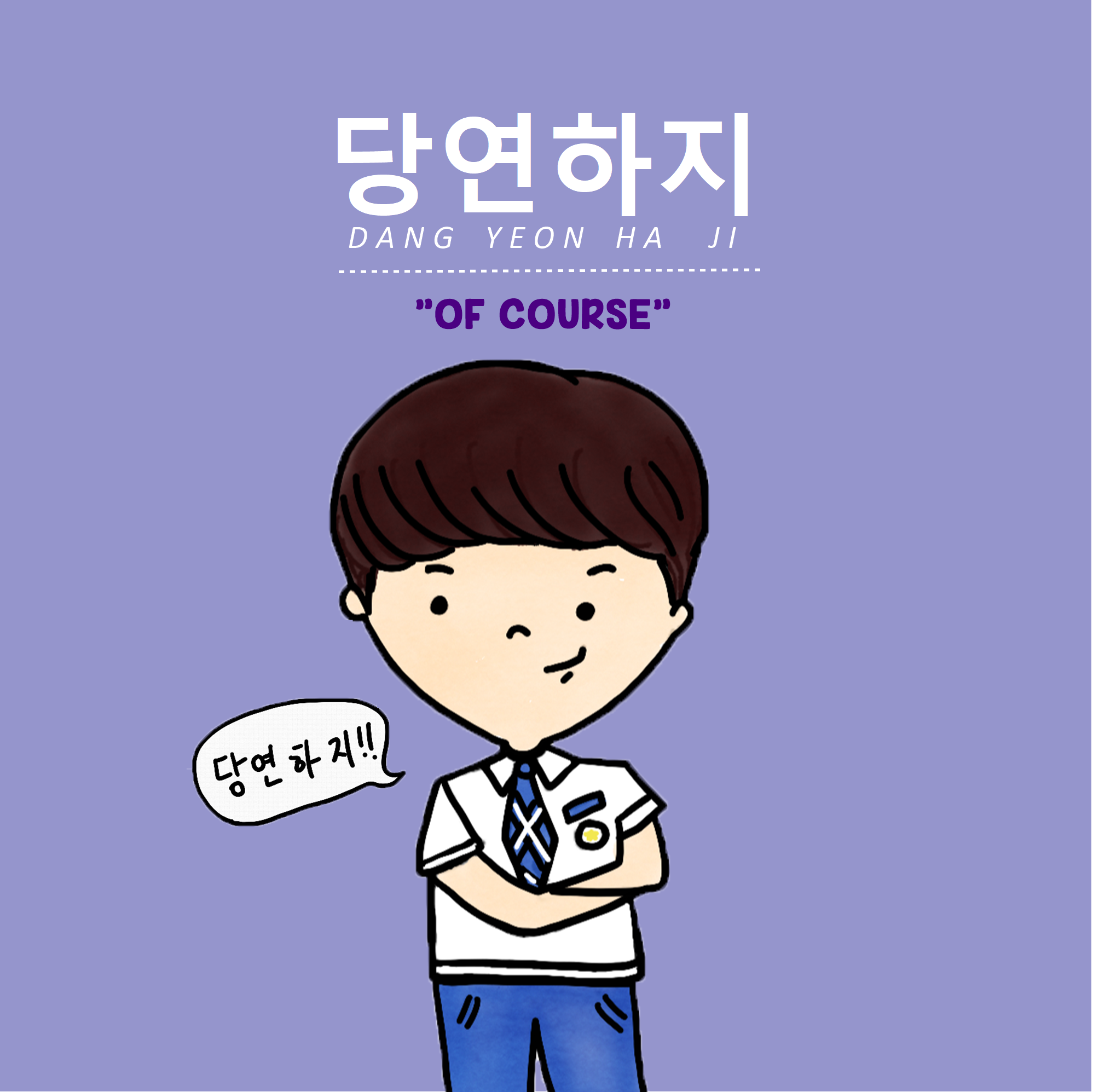 If I could explain this word in an easier way, I would say that this is the Korean version of "duh". I'm sorry, laugh at me now. Ask Hyun Tae Woon if he believes he is the toughest guy in school, without a doubt he would say, "당연하지". Well, if your father owns the school you go to, you ride a cool motorcycle and, not to mention, you have a great body- why not? 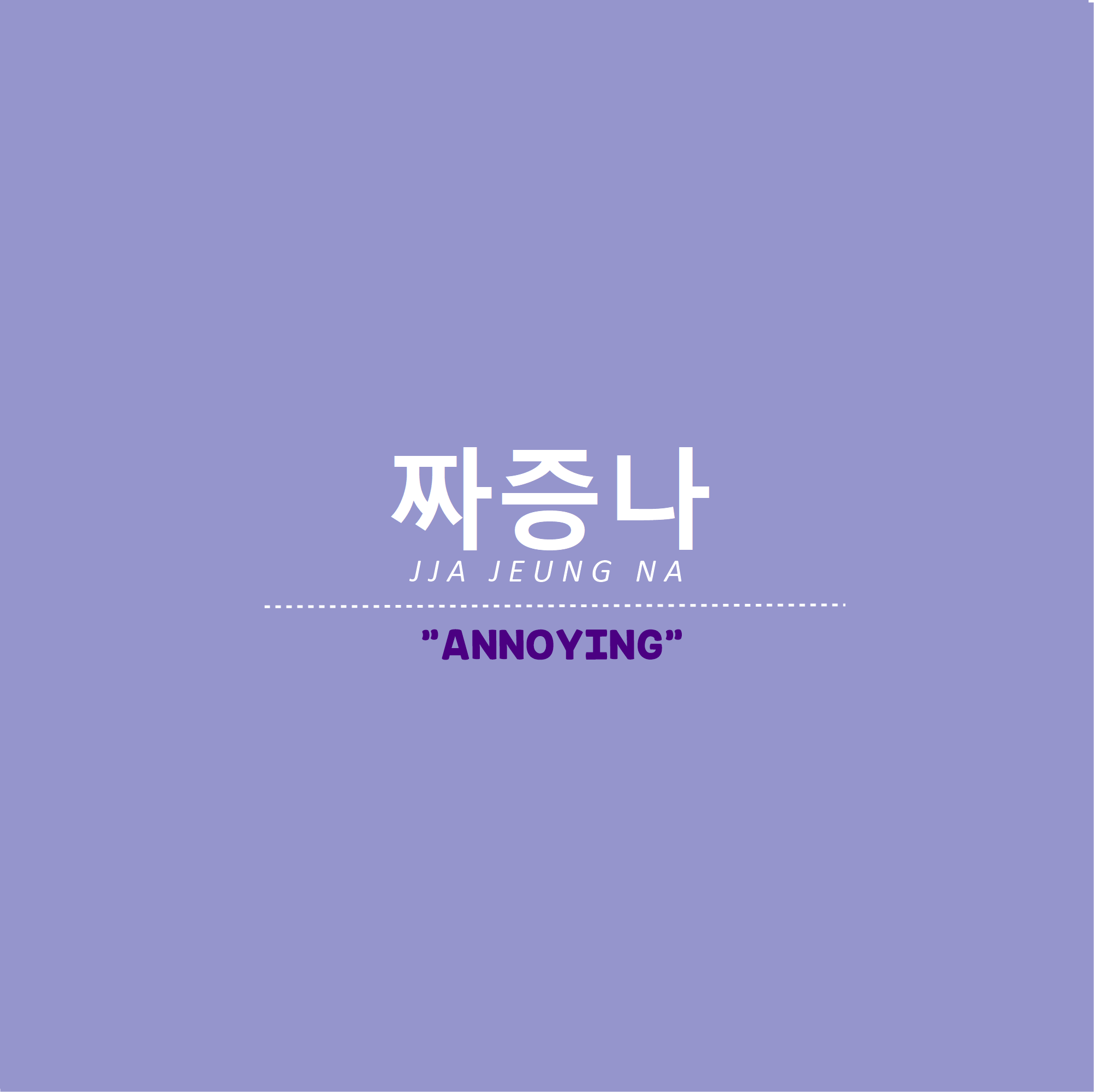 The whole cast of School 2017 probably had the chance to say this word, "짜증나". But, I guess this word perfectly suits Yoo Bitna- her character has a lot of "issues". Just kidding! I can even imagine her flipping her hair while saying the word out loud! So, if you need to express yourself from something irritating, you can say "짜증나", then I advise you to let go of the bad vibes afterwards- not good. 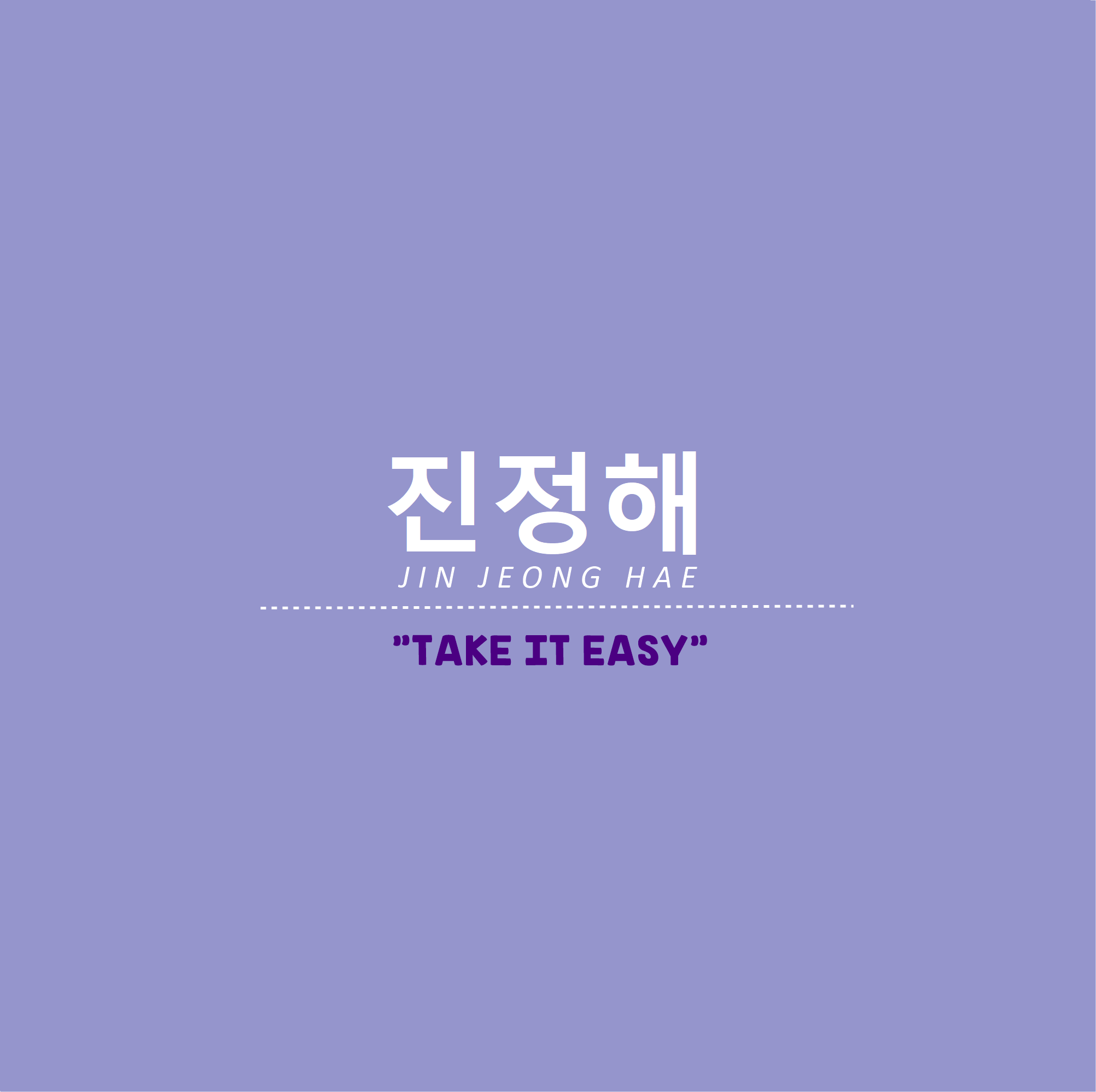 Of course, let's not leave the parents behind. Although Dae Hwi's mom is a little unaffectionate towards her son, we find her saying "진정해" in one of the latest episodes as she finds her son struggling with his past and school life. This is probably one of the famous phrases a parent can use to ease up their children a little, especially when life gets a little rough on them. "진정해", take life easy- one day at a time. 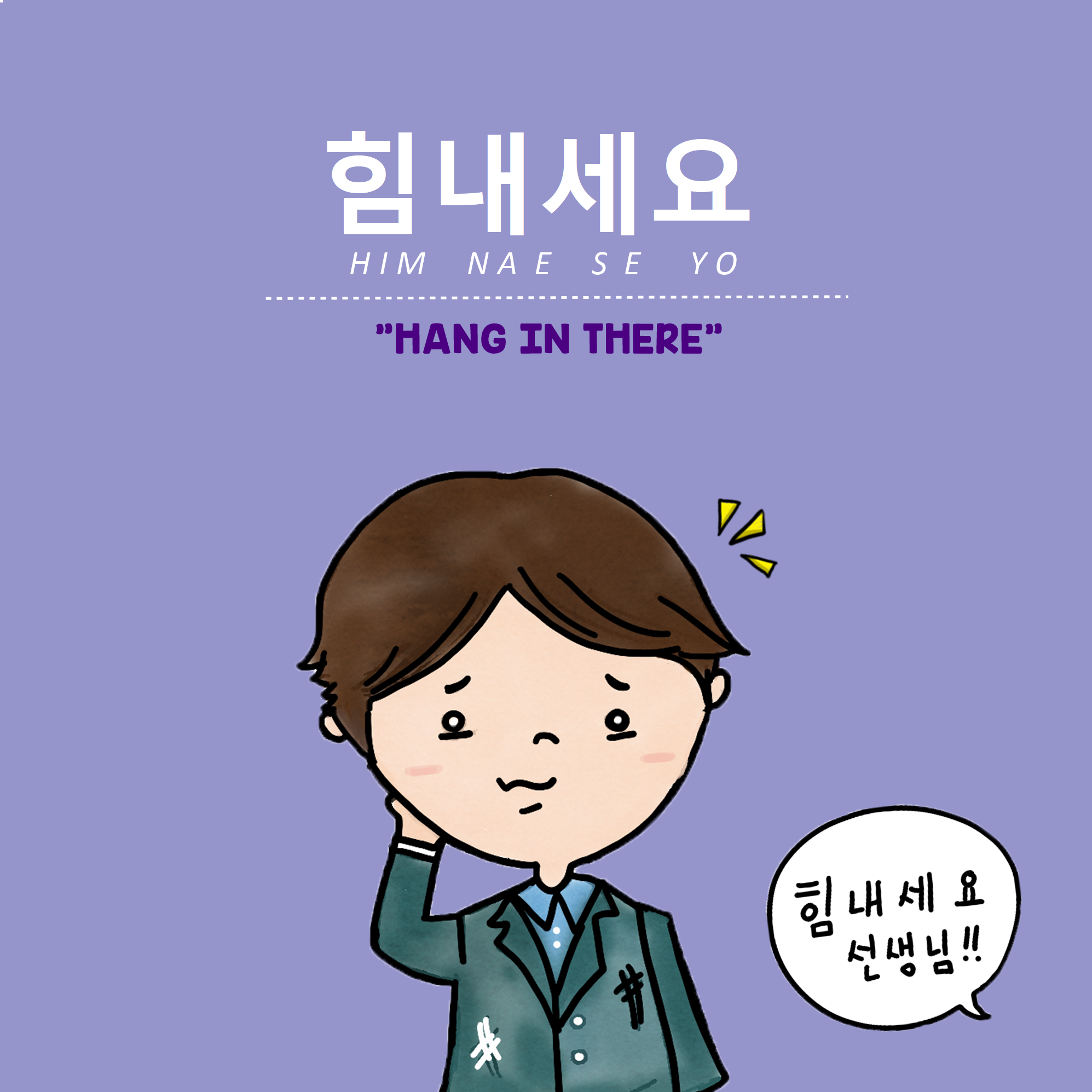 From the class chaos to his students fighting over “points”, teacher Shim Kang Myung needed to hear “힘내세요” the most. Kang Myung is an ideal homeroom teacher who loves his students more than anyone but, lacks the confidence to speak up for himself. “힘내세요 선생님” (him nae se yo seon saeng nim), hang in their teacher! 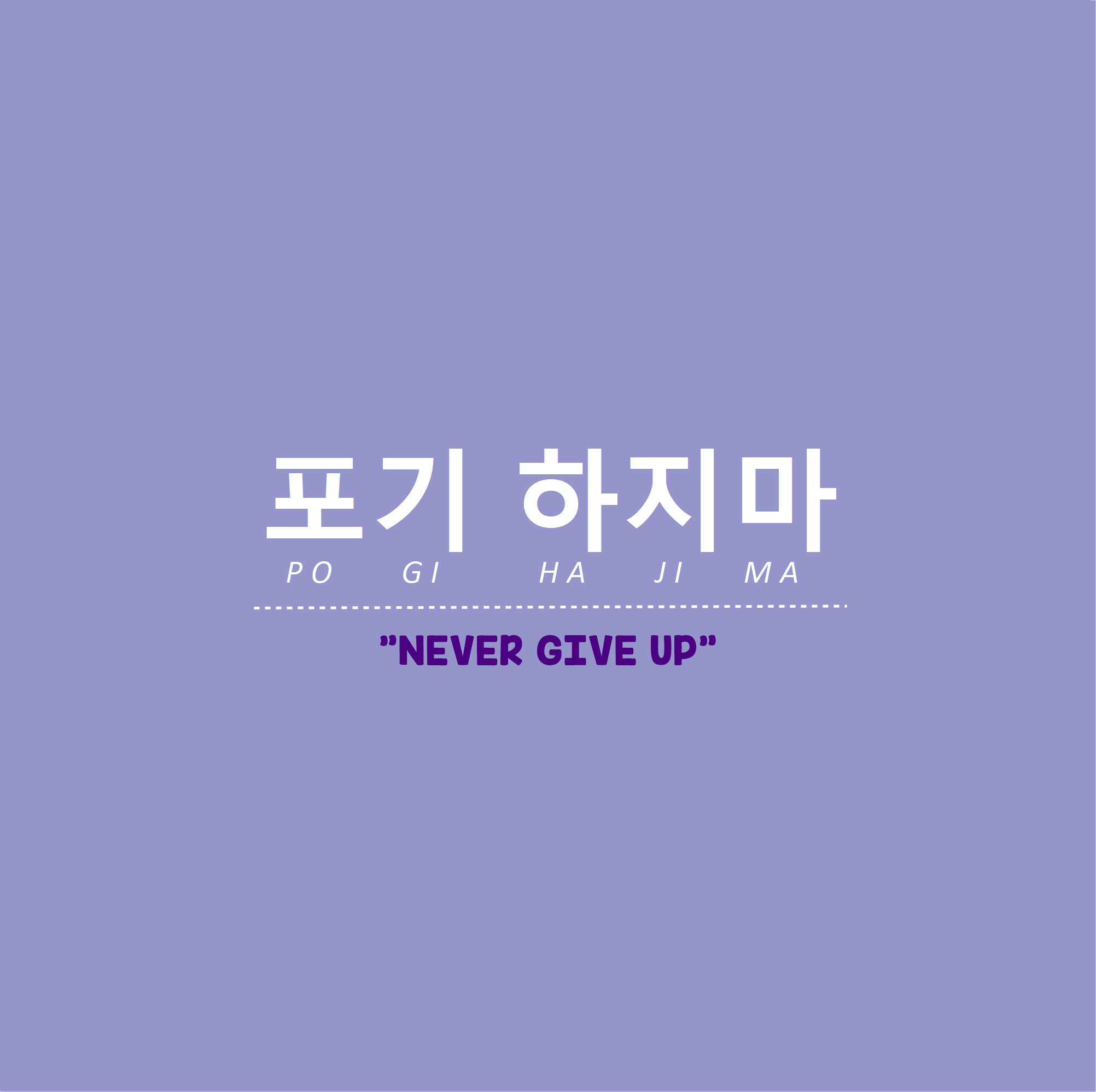 Lastly, I want to leave you with a little encouragement! “포기 하지마” or “never give up” is probably my favorite word from the drama and I would even write it down on my notebook or on a post-it. It’s a word all the characters of School 2017 can relate to, even you and me because we have our own problems, stress, and dreams to accomplish. Regardless though, always remind yourself to “포기 하지마” because in the end, the stories you are about to tell is worth more than your struggles.

I hope you find my 10 words encouraging and helpful! Indeed, KBS dramas hit two birds with one stone; enjoying while learning.

If you haven’t tried watching School 2017, do tune in to it every Tuesdays and Wednesdays 21:50 KST only on KBS World.