GOT7's Jackson responds to comments asking when he will leave GOT7.

Jackson was angry at some fans asking rude questions about his exit from the group. 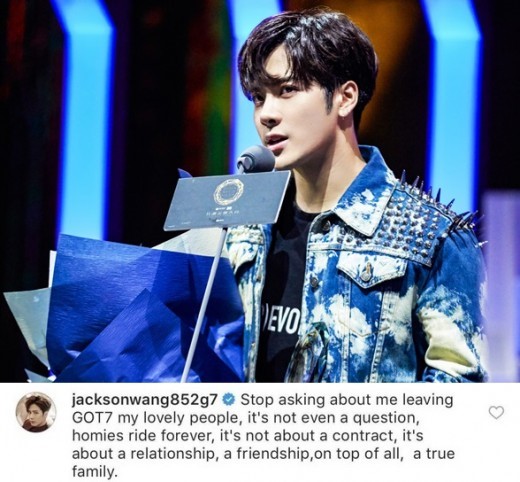 On August 26, Jackson had a solo debut in China with his single 'Papillon.' However, there were some fans who stroke a sour note in his debut. They commented on his Instagram, "When are you going to leave GOT7?"

Jackson responded to this question on Instagram. He said, "Stop asking about me leaving GOT7 my lovely people, it's not even a question, homies ride forever, it's not about a contract, it's about a relationship, a friendship, on top of all, a true family."

Previously, when Jackson was talking to his fans on V-Live in July, some fans commented, "Leave GOT7 and come to China." Jackson responded, "Bad comments only make me stronger. I will try hard as GOT7's Jackson and succeed as GOT7's Jackson."

Meanwhile, Jackson has topped China's QQ Music Chart and made it to the 'World Star Hip-Hop' list for the first time as an Asian rapper with the release of his solo single.