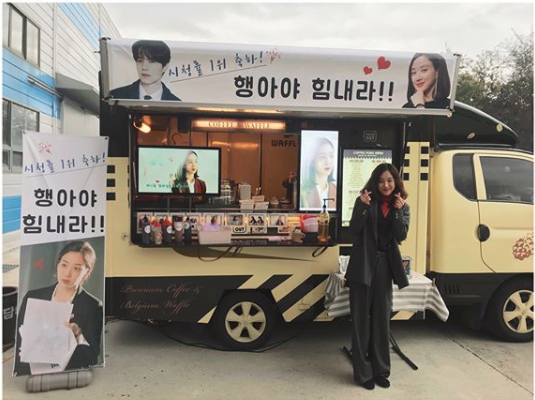 Jung Ryeowon, who plays Ma Ideum in 'Witch at Court,' shared a photo of herself taken in front of a coffee truck. She commented, "Ha.. Park Rihwan...! You're just a perfect guy..." Park Rihwan is the name of the character Lee Dong Wook played in the drama 'Bubblegum' in which he co-starred with Ryeowon.

In the photo, she is posing in front of the coffee truck that Lee Dong Wook sent to the set of 'Witch at Court' to congratulate on the drama's highest rating. The banner on the truck says, "Congratulations on no.1 ratings! You go girl, Haengah!!" Haengah is the name of Ryeowon's character in 'Bubblegum.' Lee Dong Wook and Ryeowon starred in the drama in 2015.