Block B's Zico and rappers Olltii and Hangzoo apologized for what has become a controversy over sexual harassment and mockery of Nicki Minaj. 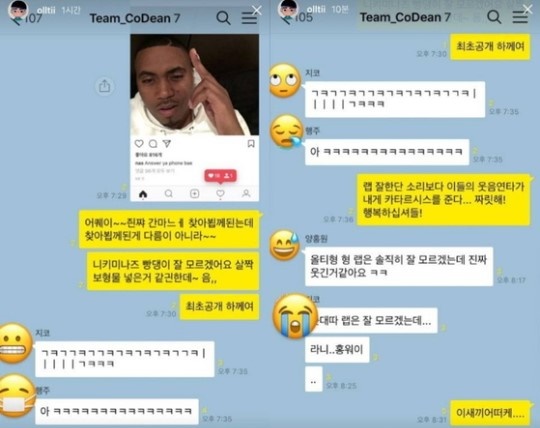 On November 28, rapper Olltii shared a screenshot of a group chat with Zico, Young B, Dean and Hangzoo on his Instagram. In the group chat, Olltii shared a picture of American rapper Nas and wrote, "I'm not really sure about Nicki Minaj's butt. It looks like she did have butt implants." Nicki Minaj is a female rapper known to be Nas's girlfriend. Zico, Haengju and Yang Hong Won reacted to his joke with a laugh.

This post caused controversy, as some found it offensive that Olltii made fun of a woman's physical characteristic. Zico, Hangzoo, and Young B were also caught up in the controversy for laughing it off.

Olltii soon posted an apology and emphasized that the reaction of the other members of the chat did not imply agreement.

He wrote, "Initially, and stupidly, I did not realize that I was wrong in doing so. It was sexual harassment and I was ignorant on how much of a mistake I was making. I completely acknowledge that there was discrimination and aversion displayed towards women on my part."

The next day, Zico shared an apology as well. Below is the full text of Zico's apology:

"Hello, this is Zico. Firstly, I am sorry for my late feedback. At the time, I was very busy during a tight schedule, and I only saw the first picture and the first sentence posted on the group chat, and I reacted unintentionally thinking that it was a parody of a viral video. I swear that I never meant to agree with the content or mock anyone, and I'd like to sincerely apologize to anyone who was hurt or worried by it. I will act more carefully from now on."

Hangzoo also apologized on Instagram saying that he never meant to agree with the joke.