BTS looks back on year 2017 & thanks ARMY at press conference 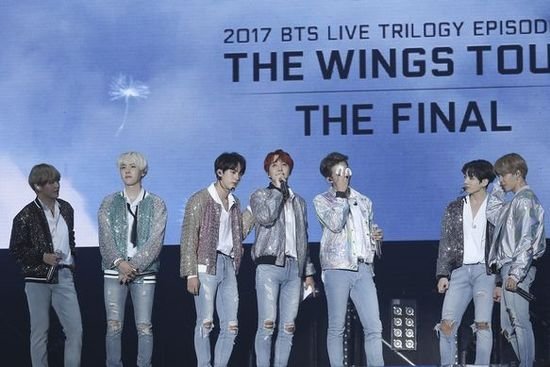 On December 10, BTS held 'THE WINGS TOUR THE FINAL' to wrap up their world tour, which began in February and went on for 10 months in 19 cities in the world. At the press conference held before the concert, the members talked about their accomplishments at the Billboard Awards and American Music Awards.

Q: Tell us about your promotions in the United States, including the AMAs.

JIN: It started to feel real when we were rehearsing the performance for the AMAs. As we were there to represent Korea, we were very nervous, but we felt more at ease thanks to the fans who cheered for us.

RM: Suga is not the type to get nervous. It was my first time seeing him so nervous. The mic was shaking. It was meaningful to sing in Korean.

Q: 'MIC DROP' was ranked 28th on Billboard Hot 100. This is the first and highest record for a K-pop group.

Suga: We are thrilled. We thought of this song as a gift for the fans, for the love and attention they gave us while we were on a world tour. 'DNA' made it on the chart, too, but it was strange seeing 'MIC DROP' on the chart as well. I check the Billboard chart every week. I've been checking it for over 10 years, and it's just strange to see our song on it. It's hard to believe."

Q: What are some memorable moments from 2017?

All: So many things happened. We owe all the accomplishments to the fans. It's not a particular moment sticking to our memories, but rather numerous memories staying in our heads with nothing missed. In the future, although scores are important too, we'd like to bring music and performance that can satisfy the fans, and we will do our best in every performance.

Suga: We had our first dome concert in Japan during 'Wings Tour.' It was so good to perform at the dome that I had dreamt of. When I went to Japan for the first time, I said I wanted to have a dome concert, and that dream became a reality. Not only the dome concert but every concert from this year remains in my memory.

V: It was memorable meeting ARMY from all over the world through 'Wings Tour.' I'm thankful for everything.

J. Hope: 'Wings Tour' in South America is memorable. They sung along to us from beginning to end and gave us a lot of energy. I was very touched. Whenever I go to a different country, I enjoy the tourist spots and food. I remember all the little things like that.

Q: What are your goals for the future?

Jin: Today we'll wrap up our 'Wings Tour.' I wonder how it'd be like to have a tour in a stadium next year. I'd like to set a big goal. The bigger the dreams, the better they are.