It has been confirmed that CNBLUE's Jung Yong Hwa is the idol being investigated by police for being accepted into Kyung Hee University's doctoral program without going through proper admission process, and Jung Yong Hwa posted a handwritten apology letter on his Instagram. 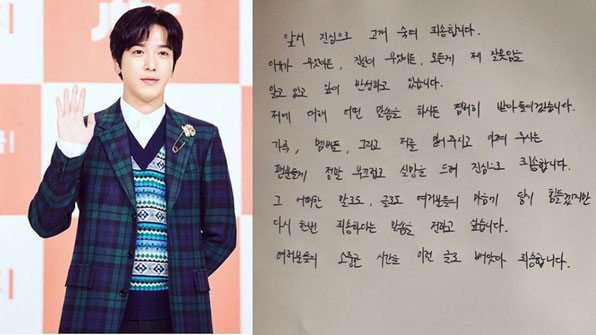 In the letter, he wrote, "Whatever the reason may be, and whatever the truth is, I know that everything is my fault and I am deeply regretting it."

His agency FNC Entertainment announced that Jung Yong Hwa will be withdrawing from his talk show.

Previously on January 16, it was reported that a famous idol was accepted to the doctoral program in the applied music department of Kyung Hee University's graduate school in 2016 despite having been absent during the interview.

The agency explained that the professor of the program suggested that he apply because the number of applicants was low, and that the interview was held at the agency's office.

The agency added that although by no means he meant to enter the school using an expedient method, he has already submitted an application for a leave of absence because he realized it might be a problem.