'Hello' Narsha is so angry that she cries on the show! [Hello, Counselor]

JeA and Narsha from Brown Eyed Girls, and Taeil, Jaehyo, Park Kyung from Block B appear on tonight's episode of 'Hello, Counselor.' 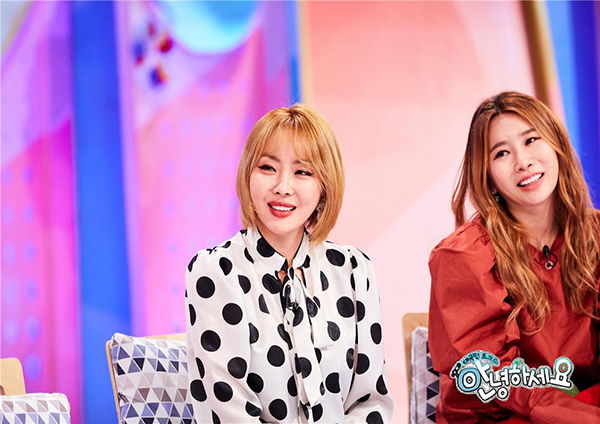 Narsha got married 2 years ago, and when asked if she's happy, she answers without any hesitation that she is. JeA reveals that she had never thought that Narsha would marry and says, "I want to meet a man who's like a friend and live a lovey-dovey life." Apparently, she is okay with guys who are 10 years her junior. When she learns how old Block B's members are, she says, "Perfect."

Meanwhile tonight, a man who is worried because of his lazy wife comes on the show. They've only been married for a year, and he says, "She's too lazy that she doesn't even bother to taste the food when she cooks it." She would wash her hair once in 4-5 days and only dress up for family events. Living up to the descriptions, his wife has come to the show without washing her hair and wearing a sweat suit.

Moreover, the wife depends too much on the husband, in matters as small as shopping groceries and picking out her clothes. The husband says, "She had to take an ID picture but wasn't able to go alone, so I had to close my store and take her."

However, the wife blames their estrangement on the husband. Narsha says, "I am angry at the wife" and sheds tears. To the guest who became a wife and mother when she wasn't ready, Narsha advises, "You have to be devoted to your own life, you shouldn't let it go."