The upcoming episode of 'Happy Together' stars female celebrities Seo U, Koo Hara, Lee Chae Young and Lee Da In. 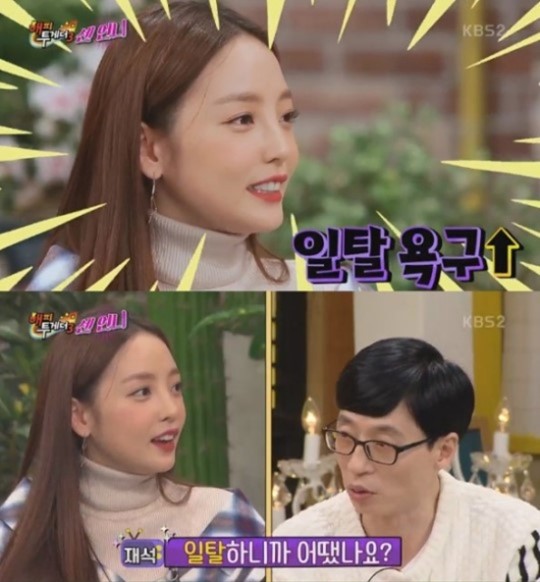 Koo Hara reveals that when she was young, she appeared in a Gwangju KBS documentary as a girl who lives life to the full. After that she came to Seoul and auditioned at SM Entertainment, where she was selected as #3 prettiest girl. At the time, #1 was actress Gong Seungyeon, and #2 was Sunmi.

While she was on a hiatus, she dreamed of a breakaway. She says, "I was preparing an album to promote in Japan, but it got canceled. I thought, 'What should I do?' and had a yearning for a breakaway. I had been working for 10 years without drinking or clubbing, so I went to clubs and drank."

But she says the breakaway proved "futile" because she wasn't able to discover herself. She concluded that it's work that brings the greatest joy to her life.

Koo Hara also talks about the private group that consists of her, G-Dragon, Sulli and Gain. She says, "I went to Paris for work, and Sulli and Gain were there on a trip. At the time, G-Dragon's brand had launched in Paris. So we traveled together in Paris for a week. It was fun because people didn't recognize us. I really loved that vibe."