BTS will start off its world tour in August in Seoul. 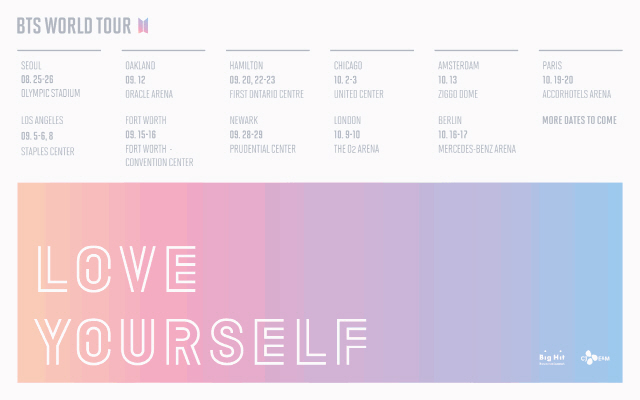 On April 27, BIG HIT Entertainment revealed the teaser poster of 'LOVE YOURSELF' world tour and announced its schedule.

On August 25 and 26, BTS will hold the first concert at Jamsil Olympic Stadium in Seoul.

According to the poster, from September, the group will tour Los Angeles, Oakland, Fort Worth, Newark, Chicago in the United States, Hamilton, Canada, London, England, Amsterdam, Netherlands, Berlin, Germany, Paris, France, and more cities to be announced.

Meanwhile, BTS will release its 3rd full-length album 'LOVE YOURSELF 轉 ’Tear‘' on May 18 and come back at the '2018 Billboard Music Awards' in Las Vegas.