Hyuna & E'Dawn are lovers for 2 years, "We want to be honest to the fans"

Triple H's Hyuna and PENTAGON's E'Dawn revealed that they have been lovers for 2 years. 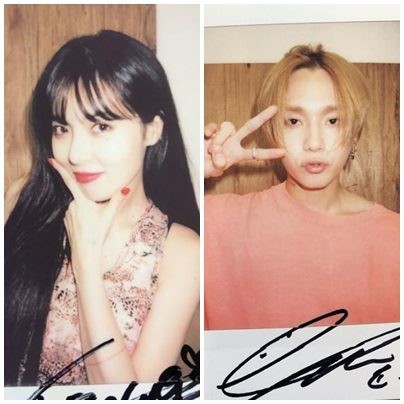 On August 2, Hyuna and E'Dawn were caught up in a dating rumor, which CUBE Entertainment denied immediately. However, the artists wanted to be "honest to the fans."

They said, "We know that [by opening up our relationship] the label will always follow us, but we thought it would be hard to look into the fans' eyes from the stage. So we wanted to be honest to the fans, who love and watch us, and stand on the stage without feeling guilty."

This is the first time for Hyuna to engage in a public relationship ever since she debuted in 2007. It seems that even CUBE Entertainment was not aware of the relationship, as the company denied the dating rumor yesterday.

Hyuna and E'Dawn got to know each other 3 years ago, when E'Dawn, who was a trainee back in 2015, performed the rap part in Hyuna's 'Roll Deep' on stage instead of BTOB's Jung Il Hoon.

Hyuna said, "I met E'Dawn when he was a trainee, and ever since he performed on stage with me, we had been friends. Then we began dating in May 2016. We grew into lovers while we worked on music together. We were very careful."

Hyuna continued, "We talked to each other about music a lot, and we started making songs together. Even though he may not appear on my album credit, there are a lot of details in the album that E'Dawn helped me with."

About her decision to go public with her relationship, she said, "Our decision was being 'honest' at least to the people who love us. And we want to do our best on stage so that we can take responsibility for this decision."

E'Dawn said, "Even though the reality might be a bit different, we thought we'd be able to be happy if we admit it. I was sorry that I might cause a negative impact on the team, so I told the members upfront. I'm sorry to the fans as well, and I will make it up by putting my best efforts into the music."