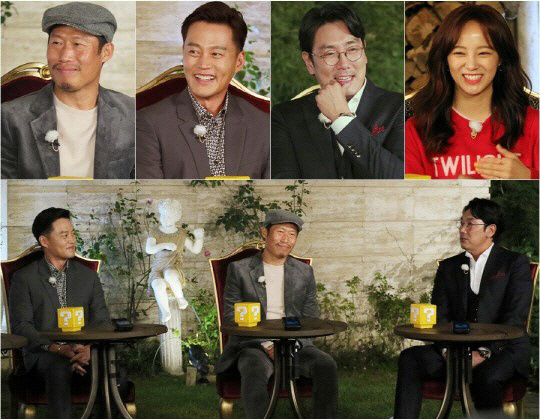 Gugudan's Sejeong gives a shout-out to Wanna One's Kang Daniel, who appeared on a TV show and named Sejeong as his role model. Saying that he wanted to be "God Daniel" just like her nickname "God Sejeong," he explained that he admired Sejeong's "cheerful energy."

Sejeong says, "I was embarrassed. Although I am in the same position as him,  I was grateful that he saw me as a role model."

Actor Lee Seo Jin explains the "script reading quarantine rumor" that was exposed by actress Han Ji Min, who was the first guest of 'Happy Together 4.' In the previous episode, the actress said, "I wore a cucumber perfume to the script reading meeting, and Lee Seo Jin made me stare out the window while reading my lines."

Lee Seo Jin bashfully gives his excuse saying, "The weather was especially nice that day. I wanted to show Han Ji Min a nice view." He adds that the smell of cucumber reminds me of his days in the military.

Meanwhile, Lee Seo Jin promised to open up everything on his mobile phone if 'Intimate Strangers' reaches 10-million-viewer-mark. He says, "I made that promise because I thought the movie would not reach 10 million. But who knows... from 9 million, I will have to start erasing data from my phone."

Cho Jinwoong reveals that his stage name 'Cho Jinwoong' actually belongs to his father. He says, "Since I was young, I liked my father's name. It's manly and cooler."

Stay tuned to hear more interesting stories from these actors!