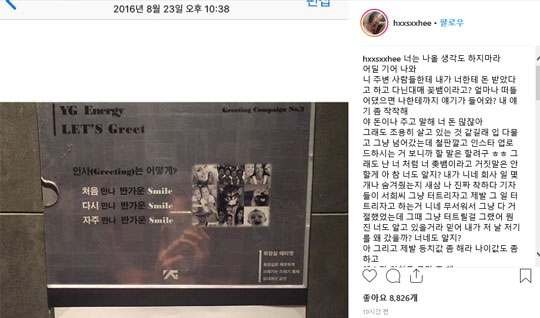 While BIGBANG's T.O.P resumed his social media activity for the first time in a year and 6 months by uploading pictures of an American artist's artwork on his Instagram, Han Seohee, a former idol trainee who was found guilty of smoking marijuana with him, left a hateful message on her Instagram. Even though she did not directly mention his name, from the context it is pretty apparent that the message is targeted to T.O.P.

Below is a translation of her text. (Bear in mind that the language she used is pretty rough.)

Don't even think about returning.

I heard you go around telling your acquaintances that I received money from you, that I am a gold digger. You must have been telling it a lot since it even caught my ears. Would you stop talking about me.

Hey, if you're going to talk, at least pay me first. I know you have a lot of money.

I mean, it seemed like you were living a quiet life, so I was going to let it pass, but when I saw you uploading on your Instagram with such a thick skin, I decided to say my piece.

At least I'm not going to lie that you're a gold digger. Oh, you know it too, right? That I hid a few wrongs of your company. I'm just too nice. The reporters begged me to expose everything, to expose that event, but I refused all of them because I was afraid of you guys, but I should have exposed it back then. I believe you know what I am talking about. Why do you think I went there on that day? You guys know, right?

Oh, and please act your size, as well as your age. And stop pretending to be an artist.