Fabric softener 'Downy Adorable' went out of stock almost overnight after BTS' Jungkook mentioned to his fans that he uses it. 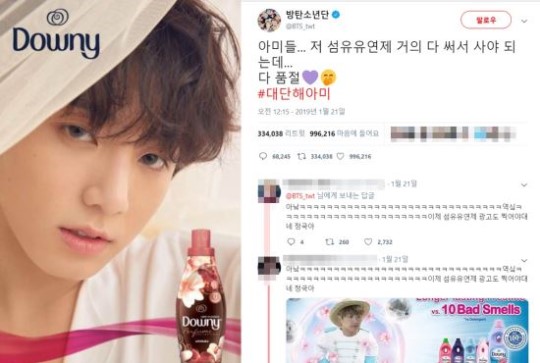 On January 20, Jungkook was chatting with his fans on BTS' fan cafe. He said, "I will go to bed after doing my laundry. I am very sensitive to scents, so I put a bit of fabric softener when I do my laundry." The fans asked him which fabric softener he uses, and Jungkook answered, "I use Downy's Adorable or something like that."

After this, BTS' fans purchased the product. The company said, "Two months worth of sales volume were sold in just one day due to a sudden flood of orders."

On the next day, Jungkook tweeted, "I almost used up my fabric softener, so I have to buy it again... but they're out of stock. ARMY, you are incredible."