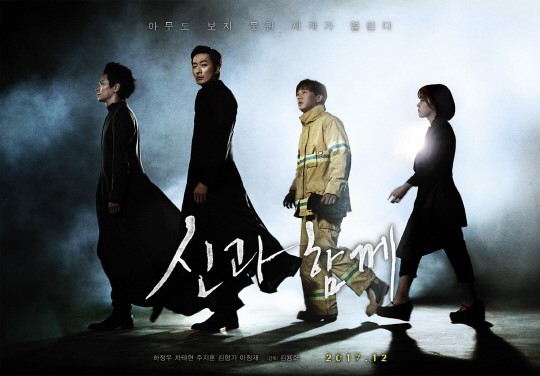 On January 4 at noon, 'Along With the Gods: The Two Worlds' recorded a total of 10,000,198 viewers, becoming the first film in 2018 that sold 10 million tickets. This was achieved only 16 days after the movie was released. Even at third weeks since its release, the movie is still no.1 in the box office.

'Along With the Gods' tells the story of a firefighter who dies and goes through trials in 7 hells for 49 days in the afterlife with the help of three grim reapers. It is the first fantasy film to record 10 million viewers in Korea.

Director Kim Yong Hwa said, "I am grateful and surprised every day. There is no other way to express my heart than saying thank you. Above all, I am glad that I got to communicate with many viewers. I will make a good sequel that lives up to your expectations. I hope this film warms your heart in this cold weather."

Actor Ha Jung Woo, who plays the grim reaper Kang-rim, said, "I am puzzled that I am so deeply loved. I am thankful to everyone these days. Thank you so much."

The cast of 'Along With the Gods' gave thanks to the viewers with hand-written messages.