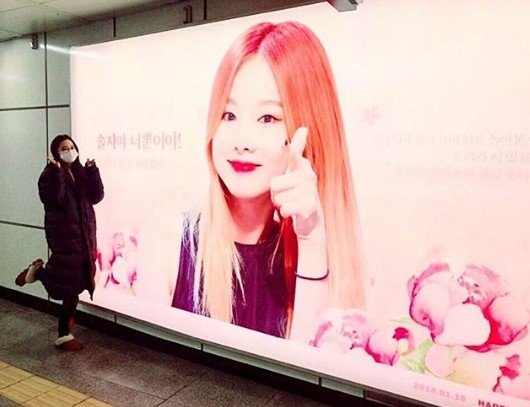 On January 7, Solji shared a photo taken in front of a display advertisement in the subway. She wrote, "I feel cheered up thanks to LEGGO♥ I will be healthy when I come back to you, so let's meet again with a smile. Thank you for being there for me in times of need♥ I love you, LEGGO." LEGGO is the name of EXID's fan club.

In December 2016, Solji was diagnosed with hyperthyroidism and halted her activities. She focused on recovery while undergoing drug treatment. She has recovered her health mostly and participated in recording EXID's album 'Full Moon,' which was released in November of last year. However, due to exophthalmos, or protrusion of the eyeballs, she decided to go through orbital decompression surgery on January 8.