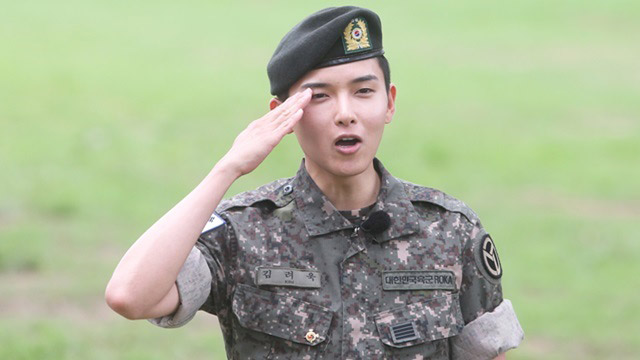 On July 10, Ryeowook was discharged from active service after 21 months of serving in the army 37th division in Jeungpyeong, Chungcheongbuk-do. Leeteuk, Siwon, Donghae and Eunhyuk came out to meet him. 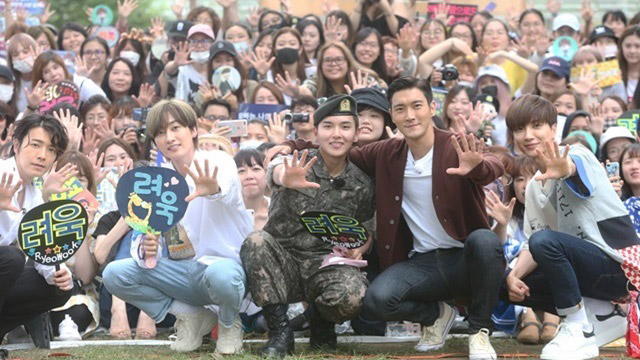 Ryeowook greeted the fans and members saying, "It's been so long." He continued, "I cried a lot inside. It was so sad to part with the friends after spending a year and 9 months with them, just like when I parted with the fans."

He said, "I returned as Super Junior's Ryeowook from sergeant Kim Ryeowook. I used to sing a lot in the military band, and now I want to sing on stage as Super Junior."

"I was worried that I might be forgotten, and I'm grateful that you've come all the way here. I will work hard. Since I'm preparing something special to approach the fans, please wait for it."

When asked if there were any difficulties during his service, he answered, "The members didn't come to visit. The members who are here today did come, but I will remember those members who did not." He laughed after saying that.

Among the 11 members of Super Junior, Leeteuk, Heechul, Yesung, Kangin, Shindong, Sungmin, Eunhyuk, Siwon, Donghae, and now Ryeowook have completed military service. Kyuhyun, who enlisted in May last year as a public service worker, will be discharged next year.

Leeteuk said, "Super Junior began enlisting in the military in 2009. Since Ryeowook was discharged today, only Kyuhyun remains, and he'll be discharged next year, too. It took us 10 years to take care of the members' military issue. We want to return as a whole group as soon as possible."

As his first schedule after being discharged, Ryeowook has chosen to meet his fans. He will hold a fan meeting titled ’Return to the little prince' on July 12 in SM Town theatre.