The press conference for new KBS drama 'The Ghost Detective' was held on August 29. 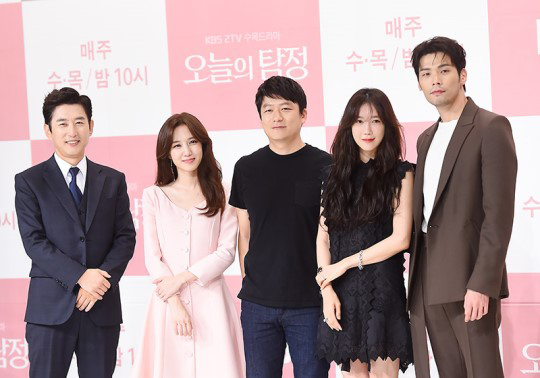 In this horror thriller drama, Lee Dail, a detective who catches ghosts, helps his assistant, Jeong Yeoul,  solve the case of her younger sibling's death. They run into a mysterious woman, Seonu Hye, and get involved in a bizarre incident.

Choi Daniel, who plays Lee Dail, said, "When I was first offered the role, I was worried if I would be able to handle it. Thanks to the staff's support, we're doing a good job making it together. I'm always thinking about how grateful I am. I'm trying to do my best. I hope my efforts will be presented in a fun way. Since it is a horror-thriller, there is some tension involved, and it is a complex drama that combines elements of fantasy and romance. The drama is a new venture, and I'm sure many people will be able to enjoy it."

Park Eun Bin, who plays Jeong Yeoul, said, "I believed meeting this drama was fate. I thought it would be a drama that you can just trust and watch since I had heard a lot of good stories about the director and the script writer. I joined hoping that I'd get to love my character, and I could not be working with better people. Although there are some scary parts due to the horror element and there are a lot of scenes where I have to pour out my emotions, I am having fun shooting the drama. We're fighting the heat wave."

E Jiah, who plays Seonu Hye, said, "Seonu Hye is a mysterious woman who shows up wearing a red dress every time a case occurs and drives everyone into a maze. Horror-thriller is a unique genre and the character is very unusual, so I really wanted to do it. I need to reply to your questions about my character, but I can't because I'm afraid it might be a spoiler."